How Is Child Custody Decided in NC?

It’s typically best if a divorcing couple can agree to the terms of child custody outside of court. If you can’t seem to settle this matter, you will likely have to battle it out in court. It can become a contentious and stressful situation for both parties and for the children.

Unfortunately, when you need a judge to decide custody arrangements, you won’t have much control over the outcome. The judge will always consider the child’s best interests when determining who the child should live with and what the visitation schedule should be for the other parent.

North Carolina statute § 50-13.1 through 50-13.9 outlines the procedures and guidelines for establishing child custody. Anyone claiming custody can pursue legal action by filing a complaint in court. The major parameters a judge might use to determine custody of a minor child are below.

Best Interests of the Child 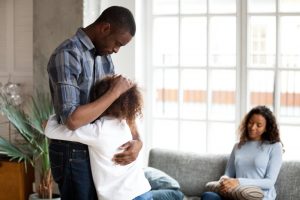 One of the most crucial factors a judge will consider in a child custody case is what will be in the best interest of and provide for the best welfare of the child. Every judge is different and will use various parameters to determine what “best interests and welfare” actually means. It’s the judge’s opinion how much each factor contributes to their decision and whether they believe the child will be better off in the care of one parent over the other.

The judge can also consider anything that might affect the child’s development, whether mentally, physically, morally, or emotionally. A judge can look at multiple details, such as:

Custody Rights of the Parents

Every parent has the right to custody of their minor child. Additionally, no one can interfere with those rights unless it is in the child’s best interest to do so.

During initial child custody proceedings, the natural parent is entitled to custody over a relative or third party unless there’s a question of whether the parent is fit to care for the child.

A judge could decide to award custody to a family member or third party if they believe it will benefit the child more than living with their parent. However, extreme circumstances must exist for a court to decide this. Most custody battles are often between the child’s biological parents instead of one parent and one non-parent.

State law does not favor one parent over the other. Although some states still choose the mother during custody cases, North Carolina does not prefer the mother more than the father in child custody cases.

However, some judges still believe mothers can provide better care to minor children than fathers. The judge assigned to your case will use their opinions and discretion to determine what they think will serve your child’s best interests.

Many states use straightforward factors to resolve child custody issues, such as each parent’s income, without hearing any preferences the child might have. However, in North Carolina, the court can also consider what the child wants.

As long as the child is of an age and mental capacity to exercise discretion, their wishes for child custody arrangements can hold considerable weight in the case. However, the judge does not have to rule in favor of the parent the child wants to reside with.

Discretion of the Court

A trial judge decides child custody issues instead of a jury. The judge can review physical evidence supporting one’s claims for custody, listen to witnesses, and consider various factors they believe are necessary to decide which parent should receive custody of the child.

You could benefit from learning everything you can about the judge working on your case. If you can gauge any predispositions the judge has and how they weigh their decisions in child custody cases before the trial begins, you could use that information to improve your chance of a favorable outcome.

Some counties give the parents some flexibility in choosing a judge to handle the case, while others assign a judge without allowing the parties to have a say in the matter.

Your judge could award a 50/50 split for custody. However, it is more likely they will award one parent primary custody and allow the other visitation. The same factors used to determine custody will apply when the judge decides on an appropriate visitation schedule.

The non-custodial parent, the parent the child does not live with, will have an opportunity to see their child on a visitation schedule. That can involve the child staying with them on the weekends or seeing them outside the home for a specified number of hours. Again, the judgment will depend on the best interests of the child.

Marshall & Taylor PLLC understands how emotionally-charged a child custody battle can be. If you and your spouse can’t resolve the matter yourselves, you have to take your case to court.

You will need a dedicated and knowledgeable lawyer by your side to fight for your rights as a parent. When you hire us, we will create a legal strategy to meet your needs and try to reach your desired result.

If you face a child custody dispute or want to modify a current agreement, do not hesitate to call Marshall & Taylor PLLC at for a consultation.